Thanks to Rich, we had the great opportunity to try out the all new Death Shimmer Spinnerbait.

Overall I am a huge believer in spinnerbaits, so when something new comes out, its hard to believe what most advertise about their baits. So, of course we were going to put them to the test!

WOW! Nothing close to any spinnerbait on the market today! The quality construction and craftsmanship shows once you get it in your hand. To begin, you will notice some precise bent sections on the blade arm. Not what your used to seeing right? First things that come to mind, will it run true? Wonï¿½t it throw off the balance of the bait when retrieving? Can a spinnerbait really be perfected anymore than it already is? Is this another one of those gimmick baits that wonï¿½t catch fish?

Getting on the water

Before I headed to the lake, I tied on the new Death Shimmer onto my Med Heavy St. Croix Mojo Bass spinning rod. First thing to do is set the line up with minimum 12# Trilene XL. This lure has weight and was meant to be thrown far. Make sure you go with a smooth casting line, and you will be able to cast this thing anywhere. On the cast, this lure sails true and can be placed with incredible accuracy as with any other spinnerbait you are used to throwing. For our review, I used the 3/8 ounce single willow blade and found the action to be outstanding. I was fishing a clear lake on a sunny day. We could see 20ï¿½ down so we were being careful not to spook the fish. Next picture is the exact Death Shimmer I was using. 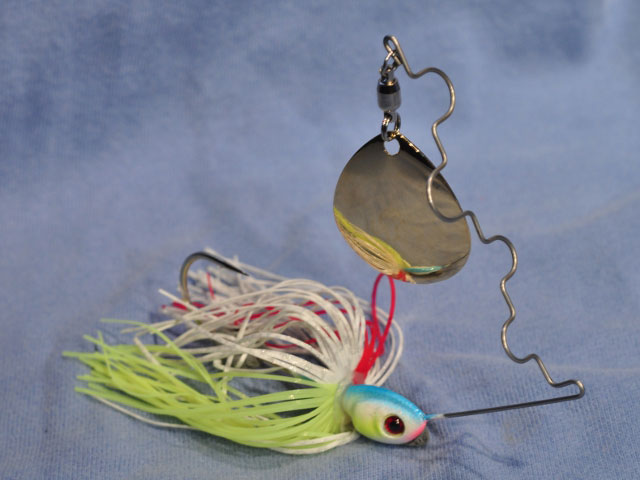 First cast, I cast it up on the edge of some rocks. I was excited to finally see the bait in action. I was paying close attention to the vibration it was sending up through the line and down my St Croix. I did not make it 5 feet from the rock and a 17ï¿½ Smallmouth slammed it. Next cast I wanted to see how the bait handled burning. Some spinnerbaits on the market get thrown out of whack when pulling through the water too fast. Not this one. I let it sink down a good 5ï¿½ and burned it back to the boat. Straight and smooth, very impressive. Next cast I wanted to do a roller coaster retrieve. I wanted to hop it up and down 5ï¿½ or so. On the second fall I had a 15ï¿½ small mouth hit it and had 2 more chase him to the boat for it. We continued down the rock infested shoreline and I was having a blast. My friend in the back of the boat was catching a few on his Strike King and asked if I had any more of these ï¿½Newï¿½ baits. I told him I did have one more. Rich was nice enough to send me 2 to try out! As soon as he tied it on, he had 4 consecutive fish in a row. He was all smiles. We lost count of how many fish we caught after our first 40 each that morning.

I personally had to see if the fish were just that active or if it was the bait I was using. So I tied on the spinnerbait I have used for years, a Booyah Tandem while my buddy continued to use the Death Shimmer. Over the next 2 hours, my catch numbers went down, while my buddy was still catching them at a decent rate. I had to go back to the DS as it was a nice day for having some fun fishing. Wouldn’t ya know my first cast I lay into a 40ï¿½+ northern, and of course I am not using a leader. Well long story short, I had to sell my soul to the devil in the back of the boat to get my other DS back. The biggest fish of the day was a 20ï¿½ 4.96lb Smallmouth and we had a great time!

I love using spinnerbaits all times of the year, but especially mid to late summer. The Death Shimmer model from Law Lures just earned a high rank in my tournament arsenal. I had an order through Cabelaï¿½s for some plastics set up so I made sure I tossed a few more of these into the basket. Be sure to look for the tandem series as well. I canï¿½t wait to try one of those out.
So to answer the questions I had listed aboveï¿½.

Will it run true? Yes, with no tweaking needed!

Wonï¿½t it throw off the balance of the bait when retrieving? Not at all.

Can a spinnerbait really be perfected anymore than it already is? Rich at Law Lures thought so, and proved it could be done!

Is this another one of those gimmick baits that wonï¿½t catch fish, That is up to you to decide, but my bloody bass thumb decided for me!!

Which is the Ultimate Fish Finder in 2017?

What’s the Best Bug Out Bag in 2021? Ultimate Buyer’s Guide